skip to main | skip to sidebar

Pointless 3-D film of the week 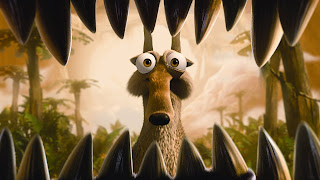 It's a truth universally acknowledged that no-one looks good in 3-D glasses. They always chafe too.

If you going to put yourself through that, you at least want the film to be hurling stuff at you left, right and centre. Few seem to anymore. Disney/Pixar announced last year that all their products will be available in 3-D from now on - but I can't really remember anyone benefiting from 'Bolt' in triple dimensions (apart from Disney/Pixar, since the tickets cost more).

This week, 'Ice Age: Dawn Of The Dinosaurs' (pictured) is another one. Not one reason for it to be in 3-D and yet there I sat, these clunky lumps of heavy plastic slowly sliding down my nose every five minutes, resting on the end of my hooter like David Dickinson's jaunty reading glasses off of daytime telly. Rubbish.

Concert movies have a bit more reason to be in 3-D (you're getting the stadium atmos) but who really goes to see them? And NO-ONE, not even your worst enemy, should have to witness that bit in 'Jonas Brothers: The 3-D Concert Experience' were Jo, Nick and Kevin Jnr whip out their huge hoses and spray their teenage girl audience with white foam. IN 3-D. So, so wrong.

So for 99% of the time it's a huge waste of time and money. Thank god for the 1% like this (WARNING - gratuitous green knickers shot 58 secs in):

This will NOT be Lesbian Vampire Killers 2. 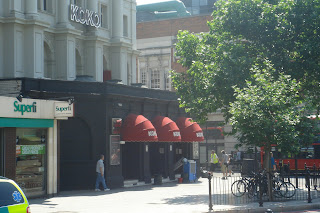 The Koko Club was where Charlie Chaplin first performed, fact fans, so it seems apt that Britain's latest comedy exports are filming here. Yep, Ricky Gervais and Steve Merchant have momentarily put global TV/podcast/Barclay's-ad domination to one side to make 'Cemetery Junction', their debut feature as writer/directors. There are 5 more weeks of filming and the pic's out next April.
Here's what I've learnt today:
1. Today's scene is a big Saturday night club moment. It's set in the 70s so all the...ahem...extras are resplendent in great retro gear. There's a great Northern Soul track playing. There are huge afros everywhere and one guy, Ricky reckons, 'looks just like Russ Abbott'.
2. There's a beautiful single take steadicam shot as the 4 leads run into the club. It's all very Scorsese.
3. The three leads are lovely. Christian Cooke (who looks a bit like Gael Garcia Bernal) plays nice guy Freddie; Tom Hughes (who looks a bit like Nicholas Hoult) plays cool guy Bruce; and Jack Doolan (who looks a bit like Jack Black) plays dopey guy Snork. Ralph Fiennes is also in it, as Freddie's boss AND the father of his crush, Julie (played by Felicity Jones, who doesn't look like anyone particularly but is just astoundingly good looking).
4. It's all very filmic (see point 2), both in terms of script and look, which is something Ricky and Steve are very keen to make a point of.  It's an intimate story of 4 friends starting out in life but it's more than aware that it's gotta fill the big screen.
5. There's some very entertaining stuff about the shoot on www.rickygervais.com
6. 'Cemetery Junction' is going to be AMAZING.
Posted by JK 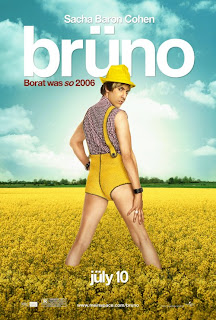 ...after last night's events.
Why? Well, it features a Michael Jackson gag (even though there's virtually a death threat hanging over anyone that talks about 'Bruno' before it's out, I love the film, HUGELY recommend it and have committed my name to the poster so I think that at least entitles me to share one tiny moment with you).
Basically, one of the many 'celebs' that Bruno interviews in his usual style is a charmingly hapless La Toya Jackson. She doesn't last long before walking out but the tipping point is a quip about her brother Michael.
Now Sacha Baron-Cohen's made a career out of being shocking but I don't think even he would want to be seen as mocking in the current atmosphere. Okay, so no-one could've predicted MJ's sad death but Sacha and director Larry Charles should consign this bit to the dustbin before the pic's out in a couple of weeks.
If not, it's gonna be a very odd moment in an HILARIOUS movie.
UPDATE: 'Digital Spy' website (which is normally pretty good) is reporting that the scene has now been cut. Now Sacha just has to pray that nothing horrible happens to Paula Abdul (ooops, I've given another bit away).
Posted by JK

Here's the packaging for a new fizzy drink... 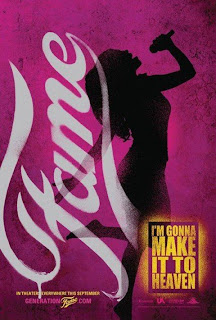 ...oh no, sorry. It's the latest poster for 'Fame'.
It releases (as they say in Hollywood) on September 25 (as they also say in Hollywood).
It's actually coming a little bit late in the day, since we've now had 3 'High School Musical's and 2 'Step Up's and the fun 'Band Slam' is on its way in the Summer.
Still, I think it will be all kinds of amazingness. I'm just trying to forget the words 'Britannia' and 'High'.

Prepare to be miserable. My Sister's Keeper is out. 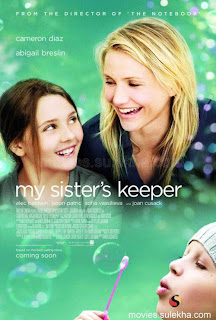 Enjoying the sunshine? Having a great holiday? Don't worry... Auntie Cameron's here to make you feel like the world's ended. In other words, that poster where she's laughing at something Abigail Breslin has hilariously said, isn't really like the film.
In the realm of cancer movies, 'My Sister's Keeper' is so upsetting it makes 'Stepmom' look like 'Mamma Mia!'. It makes 'Terms Of Endearment' look like 'Dude, Where's My Car?'. It's the movie equivalent of an Eva Cassidy double album, like hearing her plinky-plonk version of 'Somewhere Over The Rainbow' on repeat for 100 mins (okay, enough comparisons - Ed).
Shame on me for loving (almost) every second of its sugar-soaked, schmaltzy soppiness. Cameron D - as I believe Destiny's Child like to call her - is rather great as the mother of a girl with leukemia. Serious balls. It nearly made me forget about 'What Happens In Vegas'. Nearly.
And director Nick 'The Notebook' Cassavettes  - who Dr Kermode tells me EVERY TIME he has a film out, used to work in "erotic thrillers" - isn't afraid to show you the blood, sweat and vomit associated with terminal illness. Hardly a laugh riot, but that's kinda the point.
There are too many "sad and emotional" songs on the soundtrack. 13 in fact, which over 1 hour 40 works out at about one every 8 minutes. By the time Jeff Buckley pipes up over the end credits you do feel like someone has just shot your dog.
But in a Summer so full of cold, FX-laden shoot-outs, it was actually really refreshing to see something so full of raw, human emotion. Real-ish people with real problems.
Posted by JK

How to spot a Michael Mann film... 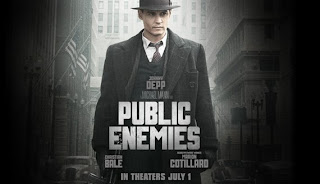 1. Guns
2. Men
3. Men with guns*
4. The niggling feeling that the film just isn't quite as good as it could be or as everyone is saying**
* 'guns' meaning 'muscles', in the case of 'Ali'. And in 'Last Of The Mohicans' they were probably muskets or summat.
** okay, maybe not 'Collateral'.
Posted by JK

Zooey Deschanel and her awesomeness. 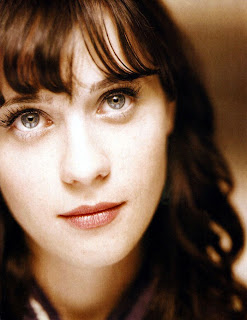 Awesome because...
1. She is naturally a little off-the-wall. In a Hollywood where Jennifer Aniston and Kate Hudson are usually described as 'kooky' (even though they aren't), it's refreshing to see someone who actually really is the full-on nut-job. In rom-coms, this is AMAZING.
2. She wears great clothes. She's like the Chloe Sevigny that you don't want to slap.
3. She is named after a JD Salinger character. This sort of pretentiousness can be kinda sexy. Speaking of which....
4..... she looks like Katy Perry.
5.  She can sing and is in a band. See 'Elf' for evidence.
6. Her dad Caleb is a cinematographer. He shot some of 'Apocalypse Now', a film that is occasionally as pretentious as naming your child after a JD Salinger character but is still universally acclaimed as a CLASSIC. Well done to you, Caleb.
6. Her next film is '(500) Days Of Summer', where clearly the director had as big a crush on her as I do since it's basically a love letter to her awesomeness. It's also a rather clever dissection of our romantic insecurities (or something). It's out early Autumn, which is brilliant since it's not that long away but a bit dumb considering the movie's title.
Posted by JK
Newer Posts Home
Subscribe to: Posts (Atom)

'You expect me to talk?'

If you can only manage 140 characters at a time...