skip to main | skip to sidebar

Youth In Revolt - THE REVIEW 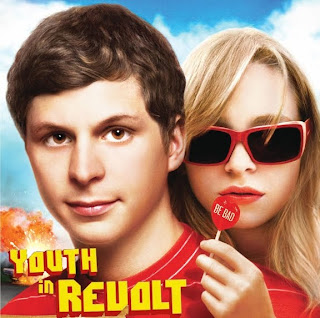 Believe it or not, it is possible for Michael Cera to get even more 'Michael Cera'. If you thought Nick & Norah's Infinite Playlist was the last word in skinny jeans angst, shame on you. If you reckoned Juno was the ultimate in oddball attitude, prepare yourself. Youth In Revolt is Michael Cera doing 'Michael Cera' turned up to eleven (but still sounding deliciously weedy).
Meet geeky Nick Twisp, wannabe writer and luckless lover stuck in downtown Nowheresville, living with his trashy mom (Jean Smart) and her latest lover (the weird brilliance of Zach Galifianakis). When the family have to escape from a dodgy business deal, they go to a campsite for a week to hideout. It's here that Nick meets Sheeni (Portia Doubleday), a poster girl for sensitive types. She loves French cinema, vinyl records and obscure poetry. Nick is totally in love. Hell, I was totally in love.
But are his retro t-shirts and ironic chinos enough for her? To make sure, Nick turns into the rebel of Sheeni's fantasies, conjuring up a bad boy alter ego called Francois Dillinger and trying to impress her with his criminal deeds.
It's at this point that the early, deadpan beauty of the first part of the movie - like Juno's wit crossed with Dirty Dancing's first-love-at-a-holiday-park theme - gets a little far-fetched as Nick/Francois gets involved in arson, drugs and cross-dressing. It's essentially a geeky teen movie version of Fight Club. A nice idea - and great to see Cera in a double role as the sleazy Francois - but difficult to pull off unless you really go as dark as David Fincher did. This favours quirky animation over Meat Loaf with man-boobs.
But view this as a small, cute, cult movie and Youth In Revolt is a sweet little thing. Cera has truly carved out a unique role for himself; hilariously outraged and prissy yet dedicated and optimistic. Only he can spout stuffy lines such as 'I refuse to stand for these allegations' with such nerdy integrity. I'm sure he knows that the joke will one day wear thin. But for now, such an effortless oddness is still a wonderful thing to watch.
Have a trailer on me:
Posted by JK
Newer Posts Older Posts Home
Subscribe to: Posts (Atom)

'You expect me to talk?'

If you can only manage 140 characters at a time...